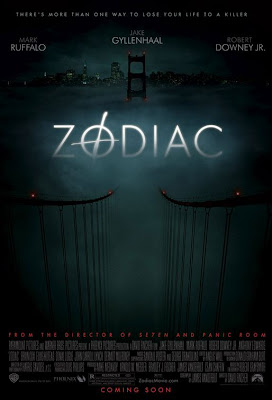 Plot: Based on the Robert Graysmith books about the real life notorious Zodiac, a serial killer who terrorized San Francisco with a string of seemingly random murders during the 1960s and 1970s.

My Thoughts: From 1969 to the mid 1970’s one name has terrorized and put fear into the faces a of generation, that name is Zodiac, there has been a great deal of films based off of the Zodiac killer but none of which have managed to do the true story justice, until director David Fincher came along to tell us the accurate story of one the most elusive serial killer’s the west cost has ever seen, as told by the ex-cartoonist and author of the critically acclaimed book “Zodiac Unmasked” Robert Graysmith and his findings over the years investigating the murders.

happen next while blowing you away with an outstanding plot that is possibly the most accurate based on a true story telling I’ve ever seen, plus the cinematography is so beautifully done it had me smiling just looking at it, and an a soundtrack that is filled with a fantastic collection of memorable songs from the 60’s and 70’s, Zodiac is a must see film that if I had seen last year I would have had this one in my top 10 films of 2007. But than again it’s good that I waited till now to see it because I got to see the director’s cut, which is simply a 10 out of 10 in my book, and that’s rear because in all my years of watching movies I‘ve only given a small hand full of film a 10 before.

The move fallows the actual accounts as documented by the eyewitnesses the police and the press. The story manly focuses on cartoonist Robert Graysmith (Gyllenhaal) and Inspector David Toschi (Ruffalo) and there collective evidence on Zodiac throughout the 60’s 70’s and 80’s and there relentless determination to try and uncover the true identity of the Zodiac and catch him.

Now movie is filled with an all-star cast that works magnificently together. Jake Gyllenhaal really comes out and shows us that his acting is more than Oscar worthy. Plus Robert Downey Jr. was fantastic in this movie, I swear the man may be a re-recovering drug addict, but let me tell you this, I may not like the man and his bad life choices, but as an actor I have nothing but the utmost respect for him, and it was great seeing actor Anthony Edwards back on the big screen because he’s a great actor that isn’t given the work he greatly deservers, not to mention one of the main stars Mark Ruffalo who I must ad mite has had a pretty rocky career over the years with a few hits and a lot of misses, but manages to turn it all around with this outstanding performance, not to mention Brian Cox a man that I swear every movie he’s in turns out to be Oscar worthy, also does a great performance, and John Carroll Lynch who plays Arthur Leigh Allen the lead suspect in the Zodiac investigation manages to give a performance that is both strong and somewhat fearful as he give that stone cold stair into the camera that will make some of the toughest flinch when looking into his eyes. Elias Koteas also does a pretty good job portraying Sgt. Jack Mulanax, one of the cops in the Zodiac investigation. And last but not least the beautiful Chloë Sevigny does terrific performance as Robert Graysmith wife during the 70’s.

Final Say: Zodiac was a magnificent film that I greatly enjoyed, it is both chilling and highly entertaining. I highly recommend the directors cut to own on DVD.

Posted by Clifford Kiyabu at 5:12 AM