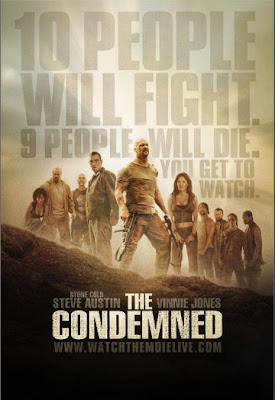 
My Thoughts: Alright, so I finally got to watch The Condemned. An

d I will say the movie was somewhat a mix bag. It has a bad plot that has way to much holes in it to really call it a plot in the first place. It also at times it’s dialogue can get a little too cheesy for even cheese lovers. lol. But it still manages to pull off keeping the viewer entertained with an arsenal of explosions and pulse pounding martial arts and street style fighting sequences that will keep your eyes to the screen.

But other than that I wouldn’t hold my breath for anything. So for movie gores that watch movie only for the plot, this is not your film. But if you're in the mood for some mindless action and fun, than this film will make your night.

The story is about a multi millionaire set up an illegal show on an small desolate island in the middle of nowhere with ten prisoners from around the world who have all been sent to death. The rules, all ten must fight and kill each other until one remains. The winner gets his/hers freedom and a big amount of money while it is all being broadcasted on the internet all over the world.

Now as I’ve said there really isn’t any plot, just an outline of what might have been a plot. But you’ll soon forget about it when the action starts up. as for disappointments well the plot being one of the problems here, because when the action does slow done you begin to ask questions that wont get answers. And the other problem is in a movie that mostly taking place on an island with ten people trying to kill each other, they cut away from the island to much to try and bring in too many side characters that aren’t even on the island and

give them character development when the film doesn’t even have a real plot anyway, I mean if anything needs development it should have been the plot and the main characters.
As for the acting. Well I can tell there isn’t much there, like the dialogue it’s pretty cheesy, the only ones that do a pretty good job would have to be Steve Austin and Vinnie Jones. Steve Austin does a nice performance making you like him as the good and honest badass he is.
But I think after almost 20 years of “cough” acting “cough” pro wrestling you have be at lease somewhat experience in the field. And of course the man himself Vinnie Jones does a great performance doing what he does best, as being kick ass killer that he is. I mean any movie that involves aa out of control killer that’s British should be played by him as I loved every minute he was in, in fact he was one of the only things that made this movie somewhat enjoyable. With out him this would have been 100% crap.

Final Say: I even though it was a disappointment it’s still something to take a look at if you have nothing to and in the mood for a little mindless fun. I recommend it for renting only.
Copyright 2008 TCWreviews.com
All Rights Reserved
Posted by Clifford Kiyabu at 4:37 AM