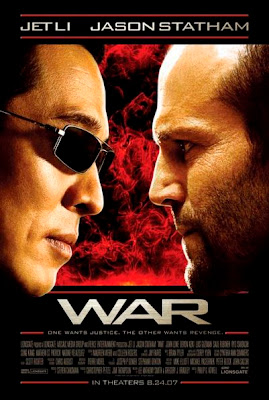 Plot: An FBI Agent seeks vengeance on a mysterious assassin known as "Rogue" who murdered his partner.

My Thoughts: War is a very misleading and somewhat disappointing film to watch. Misleading because the trailers advertises this film as a war between two men (Jet Li and Jason Statham) but instead there so-called war takes a backseat throughout most of the film, with the true plot of the film dealing with mostly Jet Li’s character playing both sides of a gang war to his advantage taking the lead. An all to familiar story that has been recycled throughout various amounts of films in Hollywood.

rdered by a legendary assassin known only as, Rogue (Li) Agent Crawford (Statham) is bent on avenging his fallen partner by any means necessary. Meanwhile Rogue has an agenda of his own playing both sides of a gang war between the Yakuza and the Triads.

Now as for the acting, well it’s nothing special really, well than again that might give you the hint that I may have liked it. So I will elaborate for you. Jason Stathamis is the kind of actor that’s not known for giving outstanding performances, Like actor Vinnie Jones, Jason Stathamis’s sole purpose is to be onscreen kicking mega bad guy ass and nothing more, so don’t look forward for anything spectacular on his part, because you wont get any. As for Jet Li I was somewhat disappointed with him in this one because after seeing him do an outstanding performance in Hero and than being blown away by his performance again in Unleashed and than once more in Fearless, I have nothing but respect for the guy, but his acting in this was as bad as the time he acted in Cradle 2 the Grave, and the bad part is we’ve seen this same type of character in some of his other bad film

s like Romeo Must Die, Kiss of the Dragon, The One, and of course Cradle 2 the Grave. But in the end with all that bad movies he’s done you can’t hold it against him, because he has done a quite impressive amount of good films as well.

But the biggest problem was not the acting or the recycled storyline, but the ending itself. See the movie runs nicely and rather smoothly until it riches the ending, at which point everything is rushed so fast that it left me saying what the hell! Not to mention the first and only real time Jet Li and Jason Stathamis actually fight each other is at the end, which last only about 2 minute at the very most. So very disappointing.
Final Say: I was really starting to like this movie until the disappointing ending happened, but if you are in the mood to watch an senseless action movie. Than this will be for you as it falls into the rental fairly category.

Posted by Clifford Kiyabu at 12:11 AM