The day Sam Raimi’s Spider-Man franchise came to a tragic end, a dark gloomy shadow began to linger over the fan boy base, with the decision by the studios to scrap the forth installment (Along with it’s director) and reboot the whole franchise by going back to basics. The decision was also made to bring on an entirely new cast and completely screw over the Raimi Universe by rebooting the entire story arc by re-telling the web-head’s early days in action. The synopsis is still unknown for the Untitled Spider-Man Reboot, and at the moment, only a release date which is set for a July 3rd 2012 release, a full cast list and the fact that it’s being directed by the director of (500) Days of Summer, Marc Webb and is being written by James Vanderbilt (writer of The Losers) is known.

But wait! There’s more! I guess because the production has already reached that point of filming where they’ve got no other choice but to start shooting scenes with the actors in their costumes, Sony has done all us fan boys a solid while upping one over the paparazzo’s by releasing a photo still of the Spider-man star, Andrew Garfield as, Yep you guessed it, SPIDER-MAN! 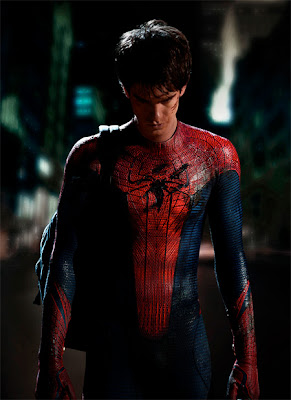 As reported by Joblo.com, if you look closely to the hi-res version of the still, you’ll notice that Spidey is donning is classic artificial web-shooters on his wrists which means this could be a hint that the studios might be going with a more traditional classic Spidy rather then the organic webbing Raimi’s Spider-Man went with. 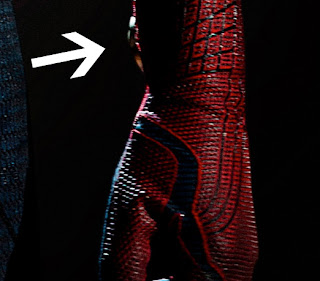 So is this a return to form for the franchise with a more classic style Spider-Man or still a turn towards a more Brian Michael Bendis ‘Ultimate Spider-Man’ take as previously rumored? You decide!

[Side Note: it‘s disappointing to see actor Dylan Baker won‘t be donning the Lizard transformation after all, the actor was thrilled to be caste in the role of Dr. Curt Connors in Raimi’s Spider-Man films and always joked about becoming the infamous reptile one day. It‘s sad to see that, like many, he is being screwed over by the studios. Aha yes, the studios. How they love to screw people over. The fans, the actors, the creative process… but I digress.]
Posted by Clifford Kiyabu at 5:07 AM