Even though we’ve known for quite some time now that it was in the works, and that nothing was going to cease it’s arrival (though some financial difficulties with MGM and one of the leading Chinese state-run newspapers spreading negative criticism towards the film did help delay it), the thought of a RED DAWN remake felt like a bad dream which we direly await to wake from. And for awhile it seemed like we’ve all forgotten about this little project as there was almost next to nothing being reported about it in quite a long time. However news is finally here about the film and it‘s new release date which can you believer it is this year!?!. Whether you like it or not the Wolverines have assembled! The first official cast photo of Red Dawn's new Wolverines just hit the web and I’ve got to say, it’s even less appealing when you take in the fact that this film feels a little less appealing being completely Swizzles (sorry but Chris Hemsworth doesn’t hold a candle against Patrick Swayze)

It’s unknown to how close the remake will follow the original, but one thing is certain, the remake will still have the Russians invading the US, only this time instead of having Cuba as their alley the Chinese will be aiding them in the invasion. There’s no doubt as the time draw’s closer to the film’s release date more controversy regarding the choice in villains will become apparent. 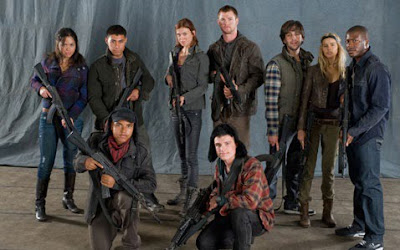 RED DAWN is currently slatted for a TBA 2011 and will star: Chris Hemsworth, Josh Hutcherson, Adrianne Palicki, Isabel Lucas, Edwin Hodge and Alyssa Diaz. And is directed by Dan Bradley.
Posted by Clifford Kiyabu at 9:48 PM