Anne Hathaway and Tom Hardy To Star in The Dark Knight Rises! 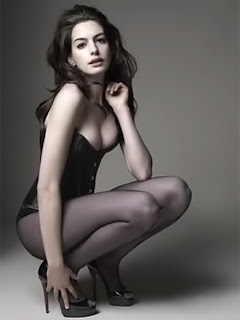 “Holy Dingleberries Batman!” Do we have big news to report today! Since TDK’s (The Dark Knight) release, fans have been ogling over the debate on who would be the cape crusader’s next foe to face off against.

From a possible re-cast on the Joker to a new rendition of the Riddler, there was even a rumor at one point about actor Philip Seymour Hoffman in the running to play the Penguin. But as per usual, all rumors were sooner or later debunked by the man himself, Christopher Nolan. However, now the good people over at Warner Bros have decided to tickle the fanboys pink by announcing the villain, or should I say villains, in the next installment, THE DARK KNIGHT RISES!

Director Christopher Nolan has unveiled the villains of his next Batman installment with the announcement that Actress Anne Hathaway has been cast as Selina Kyle AKA Catwoman, and will team up with another newcomer to the franchise, actor Tom Hardy, who will play the infamous and formidable batman villain Bane. Hardy is no stranger to Nolan’s films as he was in last year’s blockbuster hit Inception. To get a clear insight into what’s happening with the development of the next Batman sequel, look no further as we have the official press release by Warner Bros below.

Warner Bros. Pictures announced today that Anne Hathaway has been cast as Selina Kyle in Christopher Nolan’s “The Dark Knight Rises.” She will be starring alongside Christian Bale, who returns in the title role of Bruce Wayne/Batman.

Christopher Nolan stated, “I am thrilled to have the opportunity to work with Anne Hathaway, who will be a fantastic addition to our ensemble as we complete our story.”

In addition, Tom Hardy has been set to play Bane. Nolan said, “I am delighted to be working with Tom again and excited to watch him bring to life our new interpretation of one of Batman’s most formidable enemies.”

Nolan will direct the film from a screenplay he wrote with Jonathan Nolan, from a story by Christopher Nolan and David S. Goyer. Nolan will also produce the film with his longtime producing partner, Emma Thomas, and Charles Roven.

“The Dark Knight Rises” is slated for release on July 20, 2012. The film will be distributed worldwide by Warner Bros. Pictures, a Warner Bros. Entertainment Company.

In a pre-Heath Ledger Joker era I would have been skeptical about seeing either one of these actors playing the role of such iconic characters like Catwoman and Bane, but Nolan has proved us wrong once, and I believe that he can do it again. So I’m down with these cast picks. Plus it’ll be nice to see Anne Hathaway sport that tight sexy Catwoman outfit since she was so wrongfully denied her chance to play the “Vulturess” in Sam Raimi’s canceled Spider-Man 4 project.
Posted by Clifford Kiyabu at 10:10 AM