With the final chapter of the Harry Potter franchise only months away, screen it became apparently clear that it was only a matter of time before we’d start seeing Gryffindor’s finest step out of their school robes and into some big boy pants. Well it’s official, actor Daniel Radcliffe is doing just that. In his first post Harry Potter role (due out this year) the actor will be starring in British Horror “The Woman in Black (2011)” which is being Produced by Talisman Films in association with Hammer Films.] Below is the first official stills of the film which showcases Radcliffe in the lead role along with a full cast list at your pleasure. 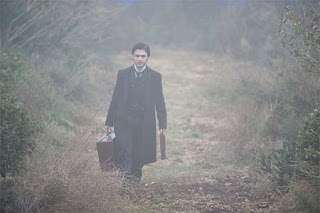 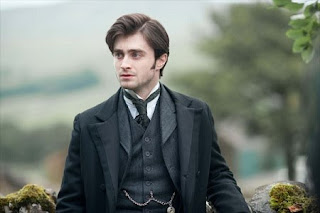 Synapses: The story follows a young lawyer, Arthur Kipps (Radcliffe), who is ordered to travel to a remote village and sort out a recently deceased client’s papers. As he works alone in the client’s isolated house, Kipps begins to uncover tragic secrets, his unease growing when he glimpses a mysterious woman dressed only in black. Receiving only silence from the locals, Kipps is forced to uncover the true identity of the Woman in Black on his own, leading to a desperate race against time when he discovers her true intent.

The film was previously adapted as a made for TV movie on the British network on ITV in 1989. The 2011 adaptation is Written By screenplay writer Jane Goldman (Kick-Ass). And is Directed By James Watkins (Eden Lake) and is based off of the acclaimed novel “The Woman in Black” by author Susan Hill. And will star: Daniel Radcliffe, Shaun Dooley, Cathy Sara, Mary Stockley, Roger Allam, Liz White, Lucy May Barker, Tim McMullan, Alisa Khazanova, Daniel Cerqueira, David Burke and Victor McGuire. It’s re

[Side Not: Aside from his great performance in the December Boys, It’ll be interesting to see Daniel Radcliffe showoff his acting capability outside the Harry Potter series]
Posted by Clifford Kiyabu at 4:59 AM