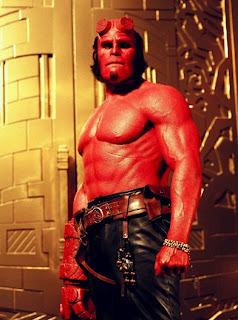 If there was ever an ideal comic for fans of the occult, Dark Horse’s Hellboy was it, and whether Ron Perlman knew it or not at the time, he was born to play the character! Perlman has been making his rounds talking about his new film SEASON OF THE WITCH, which he co-star with Nicolas Cage. While doing so he let fan boys in on some interesting news regarding a second Hellboy sequel as well as a new H.P. Lovecraft adaptation. While talking to io9, he mentioned a potential role in Guillermo del Toro's long awaited H.P. Lovecraft adaptation, AT THE MOUNTAINS OF MADNESS.

"The movie takes place in the North Pole, and so I’m on board as this sort of dog sled dude. I spend my entire life with these dogs. So I’m a rough guy, among all these scientists. I’m a contrast to the deeply intellectual world that’s being explored. I live outside all the time, I live in the elements. I’m a no-bullshit kind of guy in a world of guys who just live in their heads. So it’s a beautiful role to play, given that backdrop. I kick some butt I hope we get a chance to do it."

Perlman then went into discussing HELLBOY 3, talking about some of the ideas that would be tackled in the sequel, if and when a sequel is made

"The only thing I can share with you is we have this demon who is a victim of this Oracle, which is not negotiable. He’s been summoned to the Earth for the destruction of mankind, and that’s non-negotiable. This whole notion that his nature, is the demon of destruction — against the way he’s been nurtured by his father, John Hurt’s character, to be kind and in the service of mankind. Those things are going to be in play in the third one. Then of course you have Liz pregnant with twins at the end of the second film. So you don’t know what those two offspring are going to be? Are they going to be more human? Are they going to be more demon? Are they going to be a combination of the two? And how is that going to play out, in terms of Hellboy’s destiny. Which I say again is non-negotiable. So that’s the backdrop for the third film. And everything will be resolved, all these open-ended questions will finally be resolved. I don’t know how, he didn’t give me those details. But that’s the backdrop for it."

At the moment HB 3 is still in a talking stage and nothing at all is set in stone, but who knows, if enough hype is raised by the loyal fans (come on people!) maybe we’ll see a second sequel happen sooner then we think.
Posted by Clifford Kiyabu at 8:43 PM