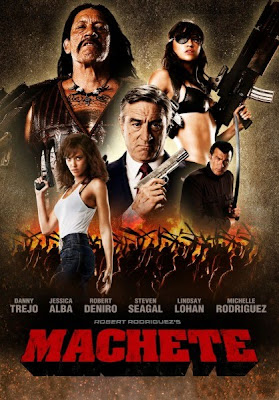 Plot: After being betrayed by the organization who hired him, an ex-Federale launches a brutal rampage of revenge against his former boss.

The Story is about: A highly skilled Federale Machete (Trejo) is hired by businessman with illegal dealings to assassinate a U.S. senator who‘s at the helm of anti-immigration radicalism. But soon realizes he's been set up and past off as a patsy in a devious plot by those in higher office. The man without a country of his own is out revenge on his former employers, with the reluctant assistance of his holy brother father Padre Cortez (Marin) and Luz (Rodriguez) a young woman who’s helping those seeking refuge in the states, and Sartana Rivera (Alba) a sexy ICE agent who’s bent on upholding the law. Together they make the bad guys wish they‘d never existed!

My Thoughts: In 2007 Director Robert Rodriguez teamed up with director Quentin Tarantino to direct Grindhouse (2007), a double feature experience that were created as an homage to the lost genre of the 70‘s and 80‘s. Among the double feature were a series of fake trailers that played before the start of each film, among the list of fake trailers were films like: WEREWOLF WOMEN OF THE SS, DON‘T, THANKSGIVING, HOBO WITH A SHOTGUN, and MECHETE. After seeing the fake trailers I became just as enthusiastic about these trailers becoming a reality as the rest of the fan base were, because it was just as entertainingly enjoyable as the film’s they were attached to. So after three long year the fan base finally got what they’ve so desperately wanted. A full Machete adaptation brought to the big screen. What many don’t know however, is that the story of MACHETE was not actually written to be a fake trailer but rather conceived by Robert Rodriguez before he had written the script for Desperado and that the development of the project has been a long labor of love.

verdict? Well to put it so simple and straight forward is not that easy, while the film works on one level it simply does not on another, and sadly the film repeats going down this depressing course of action repetitively throughout the course of film‘s run. The Good: The start of Machete is pure nostalgia for any Rodriguez fan out there as it brings a delightful splice between his work on “The Mariachi Trilogy” (AKA The Desperado Trilogy) and his work on Grindhouse, which brought together formulated into it‘s own as a bi-product, it works because it put’s Rodriguez in the zone of what he loves to do most which is making highly entertaining action driven films cuddled with rich Latin culture which he seems to execute quite nicely here, also seeing Danny Trejo and Jeff Fahey reprise they’re roles from the fake trailer was fantastic and seeing most of the scenes from the trailer strategically placed in the film was genus work on Rodriguez‘s part. The Bad: however, while the film seems to work well on the level of being entertaining it fails miserably on providing an adequately entertaining plot that moviegoers can enjoy, instead of giving the viewers a plot that’s worth their wild it ends up becoming overly repetitive and highly predictable to a mind numbing state. For example: Machete kills a bunch of bad guys then winds up with a young beautiful woman in his arms, then gets wounded. Later he winds up killing more bad guys and then, surprise, surprise - He winds up with another young beautiful woman in his arms and then get‘s wounded.. Again!. Sadly this becomes repetitive mostly throughout the whole film and doesn‘t add any new twists or turns that haven’t already been seen coming a mile away.

And The Ugly: it’s pretty obvious that Machete was made with the intention to b

e an inspiration to those of Latin heritage but I can tell you that I, being someone who has both Spanish and Latin ancestry felt more insulted by the portrayal of Latin’s in the film then inspired. But I digress, the main problem wrong with Machete is that it got a little too political at times instead of being just a all around fun rollercoaster ride of action meets entertainment like Death Proof and Planet Terror was. Simply put, Rodriguez couldn‘t make up his mind on what he wanted the film to be, at some points the film expresses a unreal sense action to the viewers but then demands to be taken seriously. As much as Rodriguez refuse’s to admit it, the film’s timing did seem a bit too coincidental coming out around the same time as when immigration reform is now a hot topic in the country again. In hindsight to what I’ve said. I really wanted to like Machete because the Grindhouse Trailer showed it had soo much to offer moviegoers but instead, wound up becoming mediocre at best

: as much as I disliked the portrayal of the characters in the film, the actors did a fantastic job in their performances. First off Danny Trejo is probably one of the hardest working actors in the industry, the man just doesn’t know what it means to take break as he’s working on more projects these days then some of the biggest paying actors do in a few years, and no matter how awful a film may be he always known’s how to shine a little light into it be simply being in it. I know he made the Spy Kids films somewhat bearable just for being in it. His performance in Machete was like watching a Mexican version of Rambo, no I take that back, he is the Mexican Rambo! His performance was outstanding, it was so impressive to see him reprise the role of machete without missing a beat that it was extremely difficult at time to tell the scenes of him from the fake trailer and the new scenes apart. Robert De Niro is a fine actor who’s done some incredibly work, but his performance as Senator McLaughlin didn’t do him any justice on his career I can tell ya, I’ve seen him do a better performance in The Adventures of Rocky & Bullwinkle then this film, but on the Brightside, at least it’s better then any of those Focker films he‘s been in, I mean those are just painfully awful.

No matter how cheesy a film may be, having Steven Seagal, Jeff Fahey, Cheech M

arin, and Tom Savini in it is a guarantee win-win on the entertainment level. Sure these guys are old, and out of shape, and probably waaaay past their prime, but having them together on screen is a sight none the less. Michelle Rodriguez was fantastic, but I may not be the only one (yikes I hope not!) but I enjoyed her much more as an actress when she had a harder body. I know she wants to feminine up but it also take a way from the bad-ass persona we were first introduced with all those years ago with Girlfight, Jessica Alba was mildly enjoyable, but if there’s one thing that irritated me the most about her performance in this films, it’s that she lacked complete personality, back in the day she could act, and would always give it her all, but now days it seems like she’s just phoning in the performance for the paycheck. Don Johnson on the other hand was a pleasant surprise in his performance as twisted border vigilante Von Jackson, who’s persona bore a strange familiarity I can‘t quite put my finger on. But if there’s any person who’s gone to the top of the mountain, fallen down to the bottom, climbed back up, only to fall back on her ass it’s Lindsay Lohan, it’s been years since the starlet has proven she’s still got what it takes to be in the big leagues, and though her performance in Machete doesn’t help her cause, she still managed to pull off a reasonable performance as April AKA Sexy Nun!

Final Say: When I initially heard about Machete being turned into a full length feature I was thrilled beyond belief, now that I’ve seen it I kind of wish it had stayed as a fake trailer, at least that way I still would have retained all my hope and love for the project. Though I hold disappointment towards the film I still hope for improvement in a sequel if one should ever be made. It’s defiantly not a recommendation to buy but is a rental fair.