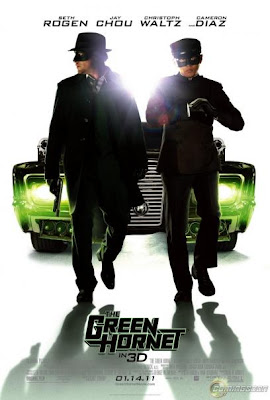 Plot: Following the death of his father, Britt Reid, heir to his father's large company, teams up with his late dad's assistant Kato to become a masked crime fighting team.

The Story is about: Playboy Britt Reid (Seth Rogen) becomes the new publisher of Los Angeles' "The Daily Sentinel" after the sudden death of his father. Britt's party life is about to change when he and his driver and kung fu expert, Kato (Jay Chou), stop a robbery. With the help of Kato, Britt starts a new career of fighting crime as the masked superhero "The Green Hornet".

My Thoughts: One of my favorite late night shows to watch growing up was the re-runs of the old 1960’s Adam West Batman series which played in the early morning hours on Nickelodeon during their Nick at Nite timeslot. The show was way before my time, but for a child with a good imagination and easily entertained, this show was my late night delight (As you‘ve probably caught on by now I was a kid who liked sneaking out of bed to watch TV while everyone slept, not knowing of my little adventures) And every once in awhile they’d play the cross over episode which featured The Green Hornet which I thought was very interesting seeing that even at a small age I easily recognized Bruce Lee playing ‘Kato’ when others my age didn‘t know who Mr. Lee was, but I digress…

ver really watched The Green Hornet show regularly but I caught a few episodes here and there, and I must admit, in comparison with the Adam West Batman series, it was very different, as where Batman was presented more of a cheesy comedic ZING and BLAM series, The Green Hornet was more of a straight up crime driven drama mixed in with some pretty heavy martial arts. But the two shows were suddenly two in the same when crossing paths but remained complete opposites from each other standing alone. For years there’s be talks in Hollywood about wanting to adapt the classic serial into a full length modern day feature but could never get around to solving their biggest dilemma, trying to decide which course of action to take the franchise. The series has changed hands with studios as well as changed names of filmmakers and stars being attached to the project, this film was considered dead in the water long before filming would even begin. It wasn’t until funny man Seth Rogen and director Michel Gondry took on the project no one was able to tackle.

And the finishing product, though wildly flowed, turned out to be quite enjoyable. I wa

s a bit skeptical about TGH being a comedy action seeing that some would consider it a insult to the source material for it to be mostly comedic, but as Rogen himself had stated that this was his incorporation of the classic series and not a carbine copy of any previous works, which to some degree I can respect even though I’d have prefer those in the industry respect the hard work that went into birthing these original characters. However, TGH proved to be exhilaratingly entertaining and unapologetic. TGH works as a modern day version simply because it’s not hiding the fact it’s a little over the top at times but rather embraces it. I mean here we have Britt Reid (Rogen) a spoiled rich playboy party animal who spends his days doing what he does best, making a fool of himself and dragging the family name down with him but when he suffers a tragedy he suddenly wakes up to his childish ways and becomes the man he was meant to be alongside his trusty companion Kato (Chou).

If that’s not eno

ugh to get you to want to watch it then I’ve failed you! it was an all around a blast, the special effect were fantastic, and even more so were the fight sequences which proved to be a quite the sight to see. Though I won’t deny the fact the film had somewhat of a paper thin plot going for it which at times were quite predictable, and must worn the 3D effect weren’t much of a wonder but more a distraction if anything, with the exception of a couple scenes in the film, 3D was completely over hyped and underused in this. Aside from that The Green Hornet’s biggest problem seems to fall flat on the fact it suffered from an identity crises. It simply did not know what it wanted to be, where in some instances it played heavy on family orientated themes, the film carried way to much violence and vulgar language to make any parent feeling awkward from the experience with their child, and that’s not even including the wide use of sexual innuendos throughout the film.

As for the acting: The acting seems to be one of the film’s strong points. Seth Rogen’s

performance as playboy Britt Reid was great, he’s not playing the same Britt Reid fan’s of the series are use to, and at time feels a little too similar to Rogen being himself rather in the role but it’s a version you’ll grow to love over time for being completely unapologetically it‘s own. Jay Chou was phenomenal as Kato, his performance was strongly reminiscent of that of Bruce Lee when he played Kato and he alone makes this fight sequences worth wild. Cameron Diaz was fairly decent as Lenore Case but I feel her talents ignored here, there was so much possibility surrounding her character that went ignored. Christoph Waltz, who played the character Chudnofsky AKA Bloodnofsky, was fantastic. He owned the role from the very start and makes for a fun and very unique villain. Another two great performances I feel were completely underused in this were Tom Wilkinson and Edward James Olmos. Both actors are legends in the film industry and should have had more involvement in the plot then what they were given. Shame on the filmmakers for not giving these men more screen time. James Franco’s small cameo as nightclub owner and crime boss ‘Crystal Clear’ in the beginning was hilarious and all around awesome.

Final Say: In hindsight to everything I just said. The Green Hornet was very enjoyable, it sure isn’t going to be a box office break nor does it completely live up the expectations that was building for it over the years, I for one was a little disappointed in the final product but when looking back at it all, it could have been much worst, so to that I say it was an okay way to kill a couple of hours. It’s totally worth checking out but NOT IN 3D. Recommended in 2D.