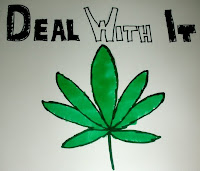 When it comes to the debate over legalization versus illegalization, I don’t really have an opinion on the matter. I figure it this way; as long as law abiding citizens agree not to abuse the privilege of having it legalized, authorities have a way to regulate it and children are well educated about the harm it can do to one’s body, then I don’t see any harm in it one way or another (alright so maybe I do have an opinion), all I ask is keep it to yourself and out of my face.

Back in October (2010), we mentioned a new comedy web series called “Deal With It” which explored life after legalization of pot, the web series which is split up as mini episodes running at about three to five minutes each follows Quincy (Played by Michael Uribes) a dealer struggling to unload a huge crop of marijuana to pay back his debts in a post Prop 19 world, where marijuana is now legal and illegal drug dealers are obsolete. The series investigates Quincyʼs new life through an absurd comedic lens, as he fights to outwit a murderous loan shark and sell the rest of his stash. Since it’s release back in October, the series has gained an impressive cult following that continues to grow daily.